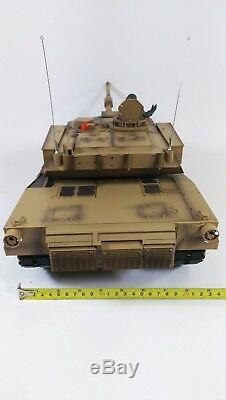 2.4GHZ Heng Long Model Army War US Battle Tank. This 1/16th scale radio control model is another top of the range RC tank from Heng Long. A replica of the US M1A2 Abrams, this striking sand coloured tank has many fantastic features including realistic sound generator, BB gun, track recoil on fire, LED light flashing machine gun plus an awesome smoke simulator! The turret rotates 320 degrees and has an elevation of 20 degrees which equates to an exciting piece of equipment. The tank comes with an advanced 2.4 GHz radio system. As well as controlling the tank movement and firing you can also start your tank engine up and control the smoke and sound generator. The 2.4GHz radio equipment gives you a longer range, improved reliability, accuracy, and the ability to use multiple models in the same area without having to use different frequency radio sets. The M1A2 hosts impressive multi-directional and multi-speed controls. The tracks move independently just like a real tank, which allow a multitude of driving styles and manoeuvres including 360-degree spins! There is a realistic suspension system with proper link tracks for getting over the toughest obstacles. There is plenty of power from the supplied 7.2v 2000MaH Ni-MH rechargeable battery pack and powerful motor, resulting in playing time of approximately 30 minutes depending on the terrain in which you use it on.

The automatic reloading airsoft cannon with track recoil action shoots 6 mm plastic pellets as far as 10 meters and can hold 60 rounds at a time. The tank also features a smoke and sound simulator that adds to the fun and realism. The sound system has very realistic sounds including different engine speed sounds and gunfire. As the sound system is 2 channel, you can hear the gunfire over the engine sounds! The cool smoke generator actually produces a small cloud of smoke from the exhaust!

It is finished off perfectly with a realistic commander figure. A Brief History of the M1A2 Abrams. The M1 Abrams, officially commissioned by the US military in 1980, was designed totally different from previous post-WWII US military tanks. Although fitted with the same 105mm cannon as the M60, the M1 was powered by a gas turbine engine and was fitted with spaced armour. Planned to be commissioned by the US military over a long period, the M1 was designed with future reforms in mind.

In 1984, the M1A1 was developed with a 120mm smooth bore cannon, and a further variant the M1A1HA was later developed featuring depleted uranium armour. This then led to the M1A2, which was fitted with Inter-vehicular Information System (IVIS), Commander's Independent Thermal Viewer (CITV) turret and new style vision block. The M1A1HA and the M1A2 both played significant roles in Operation Iraqi Freedom, being deployed by land forces as well as the Marine Corps as they moved toward Baghdad. Battery pack: 7.2v 2000mAh Ni-MH.

Realistic suspensions, like the real tanks! What you get in the box. Powerful 7.2v 2000mAh Ni-MH. Bottle of oil for the Smoke function. Package of Air soft BB Bullets. Large selection of add ons including tow cables, turret baskets. Targets so that you can practice your aim.

Easy to follow instruction manual. 6 x AA Batteries for transmitter. Larger items may be sent using Parcelforce 48 hours. Any faults must be advised to us within 7 days or receipt of the item; any items damaged in transit MUST be advised within 24hr. Please DO NOT RETURN any item before contacting us first, we may be able to solve the issue.

Most products carry a 30day guarantee. However, this will only apply where the item has been subject to normal usage and has not suffered any form of misuse. Please note that problems are rare given the large quantity of products we supply to customers around the world. The item "NEW Heng Long Radio Remote Control RC Abrams M1A2 Desert Camo Tank 1/16th 2.4GHz" is in sale since Friday, September 22, 2017. This item is in the category "Toys & Games\Radio Control & RC Toys\RC Model Vehicles & Kits\Tanks & Military Vehicles".